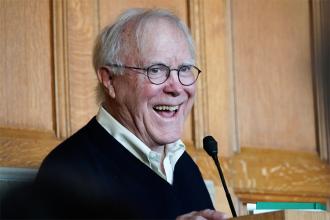 Robert Hass, a professor in UC Berkeley’s Department of English and U.S. Poet Laureate from 1995 to 1997, read from Summer Snow — his first poetry collection since 2010 — on Feb. 6, 2020, at the Morrison Library’s monthly event, Lunch Poems.

Geoffrey O’Brien, a Berkeley English professor and poet, introduced Hass: “He has a remarkable way of making a language that’s tensile and full of prosodies, and yet still feels like down-home conversation that cats and dogs can understand,” he said.

Hass read five poems — “The Grandfather’s Tale,” “Dancing,” “First Poem,” “Nature Notes in the Morning” and “Cymbeline,” the last of which he invited Korean poet Eun-Gwi Chung to read a translation.

Hass first read “Cymbeline” in English. Chung followed with her translation in Korean.

“Everything we do is explaining the sunrise,” read Hass. “Dying explains it. Making love explains it. The last place of Shakespeare explains it. We’re just as ignorant as at the beginning. We make Stonehenge over and over thinking it will do some good to know where or at least when, flame fissuring up between two stones. It lifts us as desire arches the body. Up it carries us, up and over and no one knows why or when it will stop. So, everything we do is explaining the sunrise.”

Lunch Poems is an ongoing poetry reading series at UC Berkeley that began in 2014. All readings happen from 12:10 to 12:50 p.m. on the first Thursday of the month in Morrison Library in Doe Library. Admission is free. Find upcoming talks on the Lunch Poems website and watch videos of past readings on the Lunch Poems YouTube channel.

This talk was recorded by Berkeley’s Educational Technology Services.