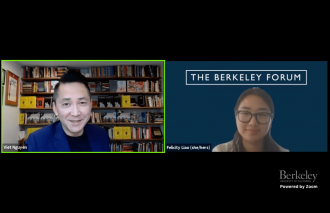 By
Serene Chang, The Daily Cal

Pulitzer Prize-winning author and UC Berkeley alumnus Viet Thanh Nguyen discussed how his personal experiences and the political climate have shaped his writing at a Berkeley Forum event Thursday.

Nguyen transferred to UC Berkeley as a 19-year-old Vietnamese refugee who was extremely curious about his identity as an Asian American. He noted that he attended a predominantly white high school in San Jose that failed to provide him with the vocabulary to understand his own history and evaluate issues surrounding race, class and gender.

“Asian American studies and ethnic studies, which was actually the major that I chose, at Berkeley was really transformative because it allowed me to see that writing and literature is not just art, although art is incredibly important, but it could also be political and social,” Nguyen said at the event. “It could connect my passions in literature to the lives of my parents, Vietnamese refugees, Asian Americans and people of color.”

Nguyen’s debut novel, “The Sympathizer,” is narrated by a Vietnamese communist spy exiled to the United States who becomes disillusioned with the communist revolution. However, Nguyen added that the protagonist does not completely embrace the “American dream” either.

Instead, the spy deliberates alternative forms of revolution in the novel’s sequel, which was inspired by anti-colonial and political theory Nguyen read as a student on campus. The popular Western narrative emphasizing the flaws of communism and the greatness of capitalism is a “false binary” that Nguyen said he hoped to challenge through his book.

War has not only shaped his own identity but also the identities of everyone living in the United States, Nguyen noted. Many Americans are not aware that their lives are connected to the military-industrial complex because the United States keeps American casualties low while killing many non-Americans, according to Nguyen.

One of the reasons Nguyen decided to become a writer was because he realized there was a need for more stories for Vietnamese refugees. As a result, he began writing a short story collection that took him 20 years to complete, but by the time he finished, there were a dozen or more books by Vietnamese writers.

Growing up, Nguyen said he was used to reading stories that did not feature Vietnamese people, yet was “perfectly comfortable” imagining himself in those stories. He said the role of a reader is to listen, learn and understand, which he hopes his non-Vietnamese readers will do.

“The people in the majority expect to be catered to, and I don’t think writers should cater,” Nguyen said at the event. “White writers don’t have to cater, don’t have to translate, so why should we? … (Non-Asian readers) have to understand that they have to be in the position that I have always been in, which is to be on the outside, listening in, and trying to be as good of a reader as the book demands.”