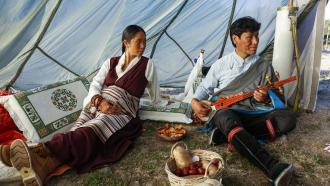 New York’s Tribeca Film Festival, one of the top festivals on the independent film circuit, is only happening online this month, but it’s still quite a coup to be included, and two Bay Area filmmakers are a part of it.

Both are virtual reality films making their world premieres in the festival’s Cinema360 section.

Carol Liu’s 13-minute short film “Tale of the Tibetan Nomad” and Van Phan’s 8-minuye short “Upstander” will be available for free in a partnership between Tribeca and Oculus, a VR company, from Friday, April 17, through April 25.

“Tale of the Tibetan Nomad” is based on Chinese playwright Stan Lai’s “A Dream Like a Dream.” The film, developed in collaboration with UC Berkeley Arts + Design, is about a Tibetan shepherd who goes on a surrealistic journey to find his missing newlywed wife. Lai was involved in the production.

“The shepherd’s journey represents the essence of the idea of going through dreams within dreams in order to awaken,” Liu said in a statement. “We can especially relate to this right now, given the state of the world we find ourselves in. When we reawaken and collectively reenter the world, how will we live our lives differently?”

“Upstander” is an animated film about bullying among schoolchildren.

“It uses backpacks to represent children in a school environment to immerse the audience in the story that defies reality and challenges the participant to think and take action,” Phan said in a statement. “How can we be a part of the solution and not be a part of the problem?”

"Tale of the Tibetan Nomad," "Upstander": Available online through the Oculus TV app for Oculus Go and Oculus Quest from April 17-25. www.tribecafilm.com