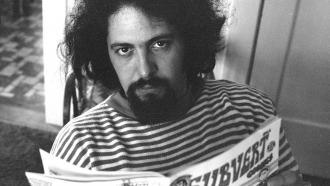 Sketches of Spain... And other eye-opening offerings from the East Bay's Mill Valley Film Festival

Judging from what’s onscreen in the documentary Bad Attitude: The Art of Spain Rodriguez, the late artist—birth name: Manuel Rodriguez—likely could never get his most provocative graphic arts work published or exhibited today in a mainstream platform.

By most accounts a combination of working class/leftist/hippie/comic book thrill peddler and serious graphic artist, Buffalo–native Rodriguez in his heyday created material that would be considered flamingly non-PC by 2021 standards: sexist, homophobic, borderline racist, ultra-violent and resolutely anti-authoritarian. In short, everything a teenage rebel might have been attracted to in the late 1960s, when Rodriguez’s drawings first appeared in such publications as Zap Comix and the East Village Other.

The times were different then, as carefully explained by a blue-ribbon jury of artists and cultural commentators. Chief among those is former separatist-feminist journalist Susan Stern, who met Rodriguez while on assignment for an article on “underground” comics and eventually lived with him for 33 years. And, coincidentally, wrote and directed this biodoc. “Spain believed in the nobility of struggle,” Stern says. “He was always trying to provoke me and everybody else. As far as I know, Spain was born bad.”

Legendary comic artist R. Crumb recalls that when he and Rodriguez started out, “Comics were held in utter contempt by the educated upper class”—a fact that evidently spurred former outlaw biker and art-school student Rodriguez to épater les bourgeois. Says Maus author, Art Spiegelman, “The avant-garde was not following the commercial rules” with its lurid sex and violence. “He [Rodriguez] always punched up,” declares writer Ishmael Reed. According to performer/columnist Susie Bright: “Spain is a trickster and a classic satirical artist.” Cartoonist Ed Piskor credits Rodriguez with “opening the doors to today’s graphic novels” with his classically trained drawings.

To some women, however, including Andi Zeisler of Bitch Media, Rodriguez’s Zap stuff was “creeped-out and unsettling.” Even intimates like Stern apparently had their doubts: “Did I make this film to defend Spain, or to defend myself?” The most eloquent explanations, however, come from the artist himself, in video footage as a white-haired ex-desperado.

In his later years Rodriguez lived in San Francisco’s Mission district, where he painted street murals and collaborated with Galeria de la Raza/Estudio 16 on the art of progressive political struggle. In his portfolio are numerous ultra-detailed urban landscapes of the Mission, complete with crowd-pleasing illustrations of low-rider customized cars. “I find the pageant of human history utterly fascinating,” he said. As we watch Rodriguez on camera casually tagging a garage wall on Mission Street, it occurs to us that he’s no Banksy. Spain’s art came from his own complicated life, with no apologies to tender sensibilities. To many, his point of view is irresistible. Sighs filmmaker Stern, onscreen: “I wanted to live in the world that he drew.”

Bad Attitude, which screens Oct. 16, is one of nine titles from this year’s Mill Valley Film Festival to play at UC’s Berkeley Art Museum Pacific Film Archive, in a program that re-inaugurates in-person theatrical screenings at the Archive for the first time since the start of the pandemic.

On Oct. 10, Spanish filmmaker Antonio Méndez Esparza’s cinéma-vérité documentary, Courtroom 3H, provides an often-depressing peek into the Tallahassee Unified Family Court system in Florida, where caregivers—usually family members—are called in to settle allegations of abuse, neglect or abandonment of children. In the tradition of Frederick Wiseman, the snippets of proceedings just keep coming, amid a plethora of issues including over who said what and when, visas and the accuracy of translations.