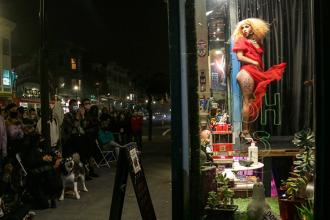 When Yuriria Avila, who graduated from Berkeley Journalism in May 2021, saw Carmen Monoxide perform last year in Love for the Arts, a competition created by one of RuPaul’s Drag Race All Stars winners, Avila couldn’t believe she hadn’t heard of the drag performer until then.

Carmen Monoxide was stunning — flawless in presentation and beautiful to watch, with a bold personality and an interesting backstory. Born in Guatemala, Monoxide studied in Los Angeles and now lives in Guatemala City, where she is part of a movement to build up the drag scene. It’s not easy to do anywhere, but especially in a country where violence against the LGBTQ community is surging, and impunity is widespread.

After learning more about Monoxide who, during the day, is clothing designer Ernesto Mendez, Avila knew she wanted to photograph the drag performer. So, she applied for and won the 2021 Dorothea Lange Fellowship. She plans to travel to Guatemala this December to document Monoxide’s life.

“I want to photograph different aspects of her life,” said Avila. “In the studio being a designer, her family, behind the scenes getting ready for shows and performing, and also her just hanging out with her drag family.”

Avila, who grew up in Cuernavaca, Morelos, Mexico, first got interested in drag four years ago when a friend of hers invited her to a drag show in Mexico City. “It really opened my mind about how gender is such a wide spectrum,” said Avila. “Anyone can do drag: There are drag queens, drag kings, cisgender women, nonbinary people dressing up however they want. You can do your own interpretation. I discovered a whole new world.”

Avila pursued photography almost out of necessity. Although Cuernavaca was a beautiful city, known for its pretty gardens and many pools, it wasn’t rich culturally, and Avila needed a creative outlet. So, she took every photography class she could.

At first, she took photos of herself and her friends trying on her grandmother’s clothes. But soon, she found herself with her Nikon D90 — a gift from her father — perched in a tree to get a better angle of a protest happening in Mexico City.

It was 2011, and thousands of people, including her family and friends, were protesting military intervention with drug cartels, which had resulted in extreme, daily violence in her once sleepy hometown.

“We had been experiencing a lot of violence,” said Avila. “There were disappearances and killings. Almost every day, on our way to high school, there would be a shooting, and we’d have to stay home or stay at school for hours until the shooting was done.”

Avila went on to attend college in Mexico City, where she studied political science. And then, in 2019, she started as a graduate student at Berkeley Journalism.

But after one semester, COVID-19 hit, the shelter-in-place mandate took effect, and students switched to remote learning.

With her graduate education drastically different from what she’d imagined, Avila began to wonder: How was the drag community, many of whom depend on stage performances for their income, handling the shutdown?

Most performers, like Monoxide, had taken their performances online. But there was one group — Fishbowl Drag — in the Haight-Ashbury district of San Francisco that was performing live shows behind a glass window of a historic hotel, The Red Victorian.

“I went almost every Saturday for four months and watched their performances,” said Avila. “I was surprised by the amount of people who were supporting them and the amazing energy that performers were putting into every single show.”

The performers hoped that their fundraising effort would help them raise enough money so they could lease the building as housing for the LGBTQ and BIPOC communities. But in October, the building’s management company said the performers didn’t have permission to live in the hotel and required them to leave.

Avila said that she hopes drag performers, like Monoxide, will begin to safely move their shows back on stage, so that she and others can enjoy their spectacular performances in person once again.

And she hopes that her project for the Dorothea Lange Fellowship will bring visibility to drag performers outside of the U.S., who deserve to be known and recognized for their talent.