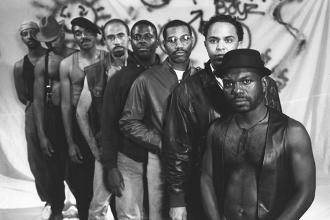 In this episode of Berkeley Talks, late filmmaker Marlon Riggs, a former Berkeley Journalism professor and alumnus, discusses his 1989 documentary, Tongues Untied, during a screening of his groundbreaking film at the Berkeley Art Museum and Pacific Film Archive (BAMPFA) in 1990.

In Tongues Untied, an experimental and deeply personal film, Riggs combines documentary footage with poetry, dance, music and performance with his own on-camera revelations to explore Black gay love and sexuality in the U.S. At the end of the film, words flash on the screen: “Black men loving Black men is the revolutionary act.”

During the film discussion at BAMPFA, Riggs said that, at first, he tried to create the film without sharing his own experiences. But after a long, hard process of thinking about how to do this, he realized he had to be the one to say the things he was looking for others to say.

“I don’t like discussing myself,” Riggs told the audience. “But I found that it [Tongues Untied] didn’t work … as a cohesive piece without … a person’s true story bringing all of these elements together. And I tried as hard as I could to sort of string the poetry together and … say, ‘Oh, it’s experimental, and people just have to buy it as it is,’ and it didn’t work.”

“I realized I was the person who could say those things,” he continued. “I was the person who’d gone through those experiences. Some of the things that I knew would be very painful for somebody else, potentially embarrassing, potentially bringing down some criticism on them … I knew that I wouldn’t find somebody who would take that kind of risk to say those things and not potentially suffer. If anybody should do it, it should be me.”

The recording of the talk is part of BAMPFA’s digital archive that contains audio of discussions by some 800 guest filmmakers dating back to the 1970s. Other filmmakers featured in the archive include icons from Hollywood’s Golden Age, like King Vidor and Douglas Sirk; contemporary directors, like David Lynch; feminist icons, like Chantal Akerman; and local underground cinema stars, like George Kuchar. (About 400 more tapes of past discussions will soon be added to the digital archive.)

After earning a master’s degree from UC Berkeley’s Graduate School of Journalism in 1981, Riggs came back to teach in the documentary program in 1987. He went on to become the youngest tenured professor there.

“Marlon was a beloved member of the J-School community, and his work has had a profound impact on our students, inspiring generations of filmmakers with his mission to confront and upend stereotypes, his experimental approach to the creative process and his authentic filmmaking voice,” said Jennifer Redfearn, a professor of documentary and director of the documentary program. “His generosity of spirit and approach to life — always evolving, learning and growing — inspire me both as a professor and filmmaker.”

Riggs, who had HIV, wrote and produced several award-winning documentary films that examined representations of race and sexuality in America. Toward the end of his life, he continued to teach his students from his hospital bed by speaker phone until he died from AIDS complications in 1994 at age 37.

In 2014, the journalism school created the Marlon T. Riggs Fellowship in Documentary Filmmaking, made possible by a $100,000 matching grant from Riggs’ Oakland-based production company, Signifyin’ Works. This year’s fellow is Skyler Glover, who, with co-director Goran Zaneti, is producing a story about, as Redfearn describes, “young Black women striving to upend systemic racism through bold leadership in their communities.”

“In a time of racial reckoning in the U.S., Skyler’s vision perfectly aligns with the fellowship’s mission to report on subjects of social importance to the American people,” said Redfearn. “Over 30 years after Marlon Riggs released his film, Ethnic Notions, about deeply entrenched and disturbing racial stereotypes, Skyler is continuing in this tradition.”

Read more about Riggs’ film work and find more audio recordings of discussions of his films on BAMPFA’s website. BAMPFA’s audio archive is open to the public for streaming. To request a recording for a project, email bampfafilmlibrary@berkeley.edu.