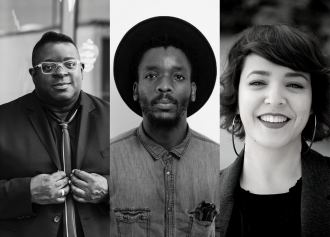 Isaac Julien and Mohau Modisakeng engage in a dialogue on histories of race, photography and the moving image. They both will discuss their past work as well as Julien's installation, Lessons of the Hour-Frederick Douglass (2019), currently at the McEvoy Foundation, and Modisakeng’s Passage (2017), which will be part of the exhibition Mothership: Voyage into Afrofuturism opening TBD due to COVID-19 restrictions at the Oakland Museum of California (OMCA). Moderated by Rhonda Pagnozzi, curator at OMCA.

Filmmaker and installation artist, Isaac Julien CBE RA, was born in 1960 in London, where he currently lives and works. Isaac Julien’s artistic practice incorporates the moving image, photography, and installation to create open-ended narratives that invite spectators to interpret the work through the act of physical and sensorial immersion.  His 1989 documentary-drama exploring author Langston Hughes and the Harlem Renaissance titled Looking for Langston garnered Julien a cult following while his 1991 debut feature Young Soul Rebels won the Semaine de la Critique prize at the Cannes Film Festival.

Mohau Modisakeng was born in Soweto in 1986 and lives and works between Johannesburg and Cape Town. He completed his undergraduate degree at the Michaelis School of Fine Art, Cape Town in 2009 and worked towards his Master’s degree at the same institution. His work engages race, the militarisation of society and the deep divides of post-apartheid South Africa and the post-colonial continent. He interrogates the collective narratives that inform our experience of the world, in particular those that evoke the black body as a site of fragmentation and distortion.

Rhonda Pagnozzi is Assistant Curator at the Oakland Museum of California (OMCA). After earning two undergraduate degrees in Developmental Psychology and the Arts, Pagnozzi worked for ten years in the field of early childhood education and community engagement. In 2014 she earned a Masters in Urban Studies with an emphasis on Contemporary Art from the San Francisco Art Institute. Her graduate research focused on the sociopolitical benefits of art in the urban setting and tackled the broader issues of access and privilege. Before taking her role at OMCA, Pagnozzi worked as the Civic Engagement Coordinator at Yerba Buena Center for the Arts. Pagnozzi’s most recent projects include Queer California: Untold Stories and Mothership: Voyage into Afrofuturism.