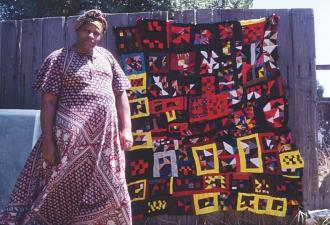 In 1997 I walked into the Berkeley Art Museum to be greeted by a staggering sight: an array of some 20 quilts unlike any I had ever seen. Their unbridled colors, irregular shapes and nearly reckless range of textiles telegraphed a tremendous energy and the implacable ambition, and confidence, of great art.

They were crafted objects that transcended quilting, with the power of painting. This made them canon-busting, and implicitly subversive. They gave off a tangible heat. I left in a state of shock — I knew I had been instantly converted but I didn’t yet know to what.

In memory the show became a jubilant fugue of small squares of velvet in deep gemstone hues, dancing with not much apparent order yet impeccably arranged for full effect. My first thought was of Paul Klee, that kind of love-at-first-sight allure, seductive hand-madeness and unfiltered accessibility, only bigger and stronger.

The planets had aligned: I’d happened on the first solo show anywhere of Rosie Lee Tompkins, an exemplar of one of the country’s premier visual traditions: African-American improvisational quilt-making — an especially innovative branch of a medium that reaches back to African textiles and continues to thrive.

Tompkins’s work, I came to realize, was one of the century’s major artistic accomplishments, giving quilt-making a radical new articulation and emotional urgency. I felt I had been given a new standard against which to measure contemporary art.

Rosie Lee Tompkins was a pseudonym, I would learn, adopted by a fiercely private, deeply religious woman, who as her work received more and more attention, was almost never photographed or interviewed. She was born Effie Mae Martin in rural Gould, Ark., on Sept. 9, 1936. At the time of the show, she was 61 and living in nearby Richmond, Calif., just north of Berkeley.

Over the years, I would be repeatedly blown away by work that was at once rigorous and inclusive. Tompkins was an inventive colorist whose generous use of black added to the gravity of her efforts. She worked in several styles and all kinds of fabrics, using velvets — printed, panne, crushed — to gorgeous effect, in ways that rivaled oil paint. But she was also adept with denim, faux furs, distressed T-shirts and fabrics printed with the faces of the Kennedy brothers, Martin Luther King Jr. and Magic Johnson.

A typical Tompkins quilt had an original, irresistible aliveness. One of her narrative works was 14 feet across, the size of small billboard. It appropriated whole dish towels printed with folkloric scenes, parts of a feed sack, and, most prominently, bright bold chunks of the American flag. What else? Bits of embroidery, Mexican textiles, fabrics printed with flamenco dancers and racing cars, hot pink batik and, front and center, a slightly cheesy manufactured tapestry of Jesus Christ. It seemed like a map of the melting pot of American culture and politics.

While works like this one relate to Pop Art, others had the power of abstraction. One of her signature velvets might be described as a “failed checkerboard.” Its little squares of black and dark green, lime and blue, slide continuously in and out of register, creating the illusion of ceaseless motion, like a fractal model of rippling water.

This surface action, I discovered, reflected her constant improvisation: Tompkins began by cutting her squares (or triangles or bars) freehand, never measuring or using a template, and intuitively changed the colors, shapes and size of her fabric fragments, making her compositions seem to expand or contract. As a result her quilts could be deliriously akimbo, imbued with a mesmerizing pull of differences and inconsistencies that communicates impassioned attention and care.

“I think it’s because I love them so much that God let me see all these different colors,” Tompkins once said of her patchworks. “I hope they spread a lot of love.”

That 1997 Berkeley show was my first Rosie Lee Tompkins moment. Organized by Lawrence Rinder, the museum’s chief curator, it helped boost her reputation beyond the quilt world centered in and around San Francisco. This September many more people will have similar moments of their own, and feel the love implicit in her extraordinary achievement, when “Rosie Lee Tompkins: A Retrospective” — the artist’s largest show yet — opens its doors once more at the Berkeley Art Museum for a run through Dec. 20. (It debuted briefly in February before the coronavirus lockdown.) The museum’s website currently offers a robust online display and 70-minute virtual tour.

This exhibition, again organized by Mr. Rinder, the museum’s director until March, with Elaine Y. Yau, a postdoctoral curatorial fellow, marks the end of a 35-year saga. Though it began with Effie Mae Martin, it came to include a small, nervous collector named Eli Leon, who met her in 1985, fell in love with her quilts and those of many other African-American creators in and around Richmond — and devoted half his life to acquiring and studying, exhibiting and writing about their work.