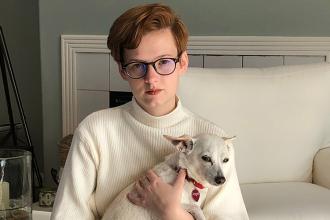 The UC Berkeley freshman and sophomore seminar was wildly popular, just like the Metropolitan Museum of Art of New York City (Met) exhibit it explored. Taught in fall 2019, Professor Maureen Miller’s students analyzed “Heavenly Bodies: Fashion and the Catholic Imagination,” a Met blockbuster that in 2018 drew a record crowd of nearly 1.7 million to see opulent haute couture inspired by the Catholic tradition.

When the course ended, sophomore Dorian Cole thought her final paper — on how a metallic Joan of Arc gown by Donatella Versace, worn at the 2018 Met Gala by Hollywood star Zendaya, engages with Catholicism — would simply become a grade.

Instead, Cole and former classmate Emily Su were invited by Miller to create poster sessions on their papers — Su’s was on an Alexander McQueen creation inspired by the 1440s Altarpiece of the Patron Saints of Cologne by Stefan Lochner — for the 95th annual meeting of the Medieval Academy of America. The conference was to be hosted last week (March 27-28) on campus by Berkeley’s Program in Medieval Studies.

Then came COVID-19, and the meeting turned virtual. No poster sessions needed. The papers, lectures and discussions would take place via Zoom.

“I was bummed,” said Su, a sophomore majoring in economics and history. (She’d gotten more bad news: The 2020 National Collegiate Table Tennis championships were off, due to the pandemic; Su plays on Berkeley’s top-ranked women’s club team).

But Cole, who’s double-majoring in history and English and said she likes to make “little video essays” as a hobby, approached Miller.

“I said, ‘What if we made videos instead?’ and she said, ‘Yeah, do it!” said Cole. The videos, one by Cole, the other by Su, quickly joined the program, which included topics like “Dark Age Jesus,” “Peacocks, Natural Philosophy and the Edible Art of Altering Nature” and “What Did the Medieval Laity Hear When They Heard Latin?”

Cole and Su “already were going to be heroes over spring break, doing poster presentations,” said Miller, an expert on medieval religious beliefs and practices, “but instead they just ran with the idea of videos for the virtual conference and developed their projects in unusual ways. Presentations among us academics can be on the dull side, and theirs were fabulous and thought-provoking and visually great.”

“It makes me wonder,” she added, “if my future students could do video versions instead of final papers.”

Miller’s fall 2019 seminar was prompted by the Met exhibit because, although stunning, “Heavenly Bodies” sparked controversy and criticism for being “all style, but no substance,” said Cole. Scholars felt the exhibit didn’t explain how these designers drew upon medieval Christianity to create clothing that engaged and commented on the world today.

Miller went to New York City to see the exhibit and agreed that it presented “incredible outfits, but insufficient information about them, and the catalog was equally insipid.”

The exhibit and catalog also were insensitive, she said, since Catholic priest sex abuses cases were a spiraling crisis in 2018. “There were garments displayed that I thought would be really traumatizing to anyone who’d been abused by a cleric,” she said, describing a series based on priests’ garb where one robe was suggestively open down the front, and another had a peephole at the crotch. Accompanying verbiage referred to the garments as “playful,” she said.

Miller asked her students to choose a garment, or a collection of garments, from the exhibit and then guided them through research and analysis of key issues, including the designers’ background, ideas and work, and the meanings evoked in the exhibit by the garments’ juxtaposition with medieval and Byzantine works of art.

Image credit:
Dorian Cole, here with her dog, Angel, in Oxnard, California, came up with the idea for turning her semester paper on Versace’s Joan of Arc dress into a video when COVID-19 forced the Medieval Academy of America’s 95th conference online. (Photo by Paula Nelson)
View Full Article