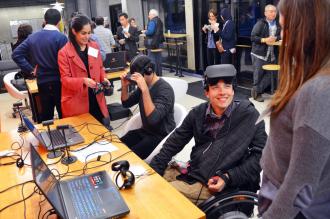 By
Elizabeth Costello, Promise of Berkeley

While we live in a physical world, our interactions are driven increasingly by digital means: Almost everyone is looking down at their phones or other devices. Augmented and virtual realities (AR/VR) challenge our relationship with technology by breaking the barriers between the physical and virtual realms. Whereas AR enables us to envision real spaces in new ways, VR places us inside imaginary worlds.

These technologies have been taught at Berkeley since the ’90s, but today they’re exploding on campus — thanks largely to Virtual Reality at Berkeley (VR@B), one of the biggest student clubs of its kind in the United States. The club gives students access to equipment and training and supports teams in developing new applications, investigating how AR/VR could change the nature of education, entertainment, medicine, and more. Here are just a few projects born at Cal.

Navigating new spaces can be a cumbersome or frustrating experience for blind people as they listen and feel their way around. A team of master’s students in the School of Information is using AR headsets to scan a user’s surroundings, then map and sonify obstacles up to five meters away. The headsets can also read text aloud, helping users ensure they are in the right place. The project could give visually impaired people greater independence in performing basic tasks like finding a bus stop.

The Lawrence Hall of Science is both a hands-on science center for kids and a training ground for teachers worldwide. The hall’s new learning labs team is researching ways to amp up AR/VR within the museum and, ultimately, for STEM learning in classrooms and the broader community. It’s partnering with Berkeley engineers to develop a VR-enhanced exhibit on marine ecology and is exploring how to make the experience more kid-friendly, since the technology has only been tested on adults.

Getting inside the story

As media are increasingly using AR, VR, or a hybrid of both, we are witnessing a revolution in storytelling. Journalism alumni Lakshmi Sarah M.S.J. ’16  and Melissa Bosworth ’05, M.S.J. ’16 recently cofounded a production company that uses 360-degree video to immerse viewers inside stories, providing a powerful marriage of information and empathy. One story produced for San Francisco’s KQED-TV follows three homeless people on their daily quest to stay safe, fed, and clean while maintaining a sense of dignity. The pair recently published a book, Crafting Stories for Virtual Reality.

Play ball with the Bears

While sports fans can watch almost anything they want whenever they want, VR is providing a more intimate experience than previously available. Kris Hsu ’19, an undergraduate studying cognitive science and film, produced Cal Athletics’ first-ever 360-degree video featuring Cal’s football victory over UCLA. Bears fans may soon be able to go behind the scenes at a men’s basketball practice or meet the women of soccer, enabling them to enjoy Cal sports long after the court or field has cleared

Harnessing the power of the mind

Biofeedback, in which patients learn how to control their heart rate and other functions that respond to stress, is effective in treating anxiety and other conditions. Undergraduates Shreya Sudarshana and Joshua Yang are leading a student team to create a VR game that could transform biofeedback from a clinical treatment to a healing activity one can do alone. Brain waves control the growth of an animated flower, and the user becomes more relaxed the higher the flower grows. The team is adding more bodily functions and other capabilities and hopes to develop a consumer-friendly version.