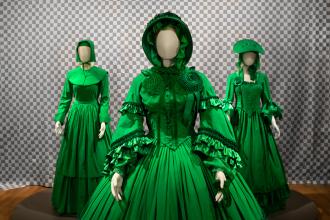 By
Kirsten Mickelwait, Promise of Berkeley

How do objects reflect cultural moments — and why do we value what we value? These are among the questions that Stephanie Syjuco, assistant professor in art practice, explores in her conceptual art. And no medium is off-limits: Throughout her career, she has combined handcrafts such as woodworking and sewing with photography, video, and other digital technologies to create large-scale spectacles of cultural objects, often inviting viewers to directly participate as producers or distributors.

In The Visible Invisible, an exhibit at the Smithsonian American Art Museum, three meticulously crafted dresses represent the Pilgrim, American Revolution, and Civil War eras. They are chroma key green, the eye-catching color used as a backdrop for cinematography that allows moviemakers to digitally superimpose their subjects on different backgrounds. Ironically, the green is “deleted” using computer software.

“There are hidden histories and power structures in these crafted garments,” Syjuco says. “At first, the clothing is seductive to the viewer — everyone loves the handmade detail — but there’s a flip side to that beauty.”

The American Revolution is celebrated as the birth of American democracy, “But it only focused on the freedoms of white men, literally,” says Syjuco, a 2014 Guggenheim Fellow whose work is featured in many prestigious museum collections. “Slavery was legal, and women were not given the vote until a century and a half later.”