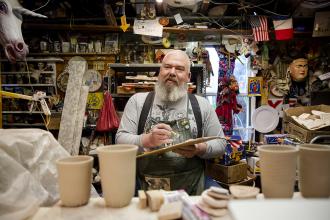 It was 1988 in Los Angeles. Ehren Tool was 18 and wanted to do something good, to help people. He hadn’t had much luck in school — “I flunked out of fourth grade” — so, he figured he’d try out another career path that didn’t require straight As, but did require a dedication to doing what was right. He would become a police officer.

To enroll in the police academy in L.A., he had to be 21, so instead, he enlisted in the Marine Corps to become a military police officer. “I joined the Marine Corps with all kinds of good and noble intentions,” says Tool.

In 1991, Tool was deployed to the Gulf War, first to Saudi Arabia, then into Kuwait. As a field military police officer with First Marine Division as part of Task Force Ripper, he worked as a convoy escort and handler for enemy prisoners of war. “I was super gung ho and a real believer that we were the good guys,” he says. But a few months into his seven-month deployment, he realized it wasn’t that simple.

The Marine next to Tool told the man, “Hiroshima, Nagasaki — all gone,” motioning that his family had been killed, even though they didn’t know if it was true. The Iraqi soldier dropped to the ground, sobbing.

“It really undermined the idea that we had of the people we were fighting — that they hate freedom, that they’re evil, that they hate us,” says Tool. “This guy was just concerned about his three kids in Baghdad. It really messed with me. I decided I didn’t want to be a gunslinger anymore.”

Although Tool went on to work as a Marine Security Guard in Rome and Paris, protecting lines of communication between the U.S and Italy and France, he never went back into combat.

Today, Tool works as the ceramics studio manager in the Department of Art Practice at UC Berkeley.

And, in his off-time, he creates brutal-looking clay stoneware cups that he decorates with images about war — cups that he hopes will start honest conversations about war and the conflicted, complicated feelings and experiences that come with it.