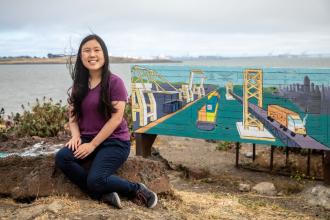 Much of the Bay Area’s history exists out of sight. Or at least out of notice.

A new environmental art installation, and self-guided audio tour, at the Albany Bulb aims to change this by sharing the former dump’s history and calling attention to fossil fuel extraction, mining and climate change. The exhibition and tour, called Monument to Extraction, will remain on display at the Albany park until its pieces erode naturally or are altered by visitors.

If you take the audio tour, you’ll listen through your phone as you wander through the 1.5-mile site. Soft music will play and the calm voice of a UC Berkeley student will speak over the melody: “Pay attention. The Albany Bulb is full of hidden stories.”

He was one of many 19th-century Chinese immigrants who labored in the Bay Area’s dynamite industry for less pay than their white equivalents and who were often given the most dangerous jobs with volatile materials, according to historical research done by students who designed the Albany Bulb exhibition as part of an art and city planning course at Cal this spring.