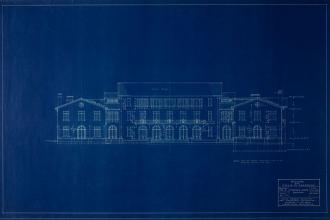 “I knew she was a prolific architect,” said Marino. “But I didn’t realize that so many of her projects were buildings for women’s organizations.”

As the only woman in Berkeley’s Class of 1894 to graduate from the College of Engineering — the university’s architecture program was not established until 1902 — Morgan will be featured prominently on banners across campus this fall for the current yearlong celebration of influential and pioneering women who have studied, researched or worked at Berkeley. Women were first admitted to the campus 150 years ago.

From the more than 700 commissions Morgan worked on, around 100 were designed and constructed specifically for women. The archives contain sketches and floor plans of buildings including the Emanuel Sisterhood Residence, now the San Francisco Zen Center; Phoebe Hearst Memorial Gymnasium, on the Berkeley campus; and El Campanil, the bell tower at Mills College in Oakland.

Marino, who has worked at the archives since 2014, said that Morgan’s work, preserved in a secure, climate-controlled vault, includes project drawings, historic photos and Morgan’s academic work.

The Environmental Design Archives is a non-profit research facility at CED that is committed to raising awareness of the architectural, landscape and design heritage of Northern California and beyond. It does so by collecting, preserving and providing access to primary records of the built and designed environment. Since 1959, community members, and Morgan’s colleagues and family members have donated to the archives’ Julia Morgan collection.

“The documents we steward provide a window into the past — unfiltered access to documents created by Morgan herself and physical proof of her prolific career, skills, incredible hand, design development, structural knowledge and how she was integral in designing spaces for women to advance in society,” said Marino.

Morgan also designed Girton Hall, now known as Julia Morgan Hall, at the University of California Botanical Garden. The space was created in 1911 as a gathering place for female students who wanted a counterpart to Senior Hall, a meeting place for male students.

Marino said Morgan was commissioned by many women’s city clubs throughout the years, but the largest project was for the Berkeley Women’s City Club in 1929, which was completed in less than 11 months.

“Women’s clubs were really popular in the 1900s,” said Marino. “They were places where women got together and held classes on literature and economics. They also discussed civil engagement strategies and organized actions to impact the political climate.”