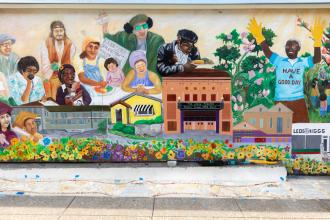 Berkeley’s ongoing discussion to create 9,000 homes over the next decade will include plans to accommodate artists with affordable housing that meets their needs, including flexible live-work spaces throughout the city.

The report is based on a small citywide survey released in November, which the Planning Commission referred to the City Council’s Housing Element process last week.

The Civic Arts Commission survey received responses from 163 artists across different disciplines who identify as both artists and “cultural workers.” From these results, the commission has recommended prioritizing multiple affordable housing options and the possibility of a guaranteed basic income program for artists who qualify.

These recommendations will be among several different priorities in the Housing Element discussion, which include affordable housing for marginalized groups, people who are homeless, families, residents who have been pushed out of Berkeley and the Bay Area, and many others, along with zoning changes to address the city’s legacy of racist housing laws.

Councilmember Sophie Hahn, who wrote the referral, said it’s a plan to retain the city’s existing artists and bring back those who have left, as many creatives have been pushed out of the Bay Area during the region’s ongoing housing crisis.

“Artists are the foundation for Berkeley’s status as a center for free expression and creativity. Without them, we lose an important part of what makes Berkeley a uniquely worthwhile community,” Hahn said. “As artists are increasingly squeezed out of Berkeley and the Bay Area, we must affirmatively plan for the kinds of affordable living and workspaces they need to survive — and thrive.”

Creatives and cultural workers in Berkeley have unique needs, like live-work spaces where they can produce their art, and specific income structures that can make it difficult to apply for existing affordable housing, according to results from the survey.

Of those who responded, 82% said they do their creative work in their living area, and over half of those people said their medium requires extra ventilation. The safety challenge of these spaces was brought to the forefront after the Oakland Ghost Ship fire of 2016, and the report says it’s crucial to involve artists in ongoing conversations on how to best utilize properties for their work.

The Planning Commission referral suggests the city find space in commercial, manufacturing, and mixed-use buildings (in both new and existing properties), as well as exploring other possibilities. This would include affordable live-work spaces on the ground floor of some commercial areas, especially those on University Avenue and the San Pablo Avenue corridor in West Berkeley, which is considered the hub of the city’s arts, industrial and creative neighborhood.

These changes would involve consultation with property owners and commercial businesses, and consideration of a “lively street presence” if retail is swapped out for live-work spaces. It could also involve affordable artist accommodations in new affordable housing and market rate housing projects.

To aid their rent burden, the Civic Arts Commission report suggests a pilot guaranteed basic income program for artists modeled after findings from initiatives in San Francisco and Minneapolis. It would prioritize artists who are Black and people of color, and provide them with a monthly, unrestricted stipend to cover rent and food so they can continue their practice.

The referral asks that funding from Berkeley’s Measure O be set aside for several different affordable housing considerations for artists and cultural workers.

These recommendations will be incorporated into the city’s Housing Element. Updates on meetings and schedules can be found online on the city’s website.