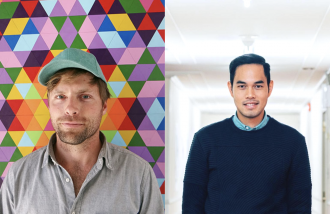 Presented by the Jacobs Institute for Design Innovation and BAMPFA.

Join Oakland-based artist, designer/builder, curator, and creative director Drew Bennett, the founder of Facebook’s artist residency program, and San Francisco-based artist, designer, and Berkeley MDes lecturer Purin Phanichphant, for a discussion of careers in the arts and other creative fields. They will be joined by Eric Paulos.

Drew Bennett (b. 1981, Chicago, IL) is an Oakland-based artist, designer/builder, curator, and creative director. Bennett graduated from Colorado College in 2004 (BA, Fine Arts). Bennett moved to San Francisco in 2005 where he exhibited painting, installation and social practice work as well as developed his own business as a designer and builder. In 2012, Bennett founded FB AIR, Facebook’s artist in residency program. Between 2012 and 2018, Bennett grew the program from a headquarters-based residency experience to an international site-specific installation program commissioning hundreds of new works annually. Initially featuring friends like David Wilson, Jay Nelson, Lucky Dragons, and Serena Mitnick-Miller, Bennett would eventually work with some of his early heroes, including Katharina Grosse, Barry McGee, Alicia McCarthy, and Tom Sachs. In 2015, Bennett co-founded Starline Social Club (Oakland) with Adam Hatch and Sam White. Starline operates as a bar, restaurant, and venue that facilitates artists, musicians, activists, and community based entrepreneurs in the exhibition of music, performance, literary, social, culinary, and visual media. Now resigned from his role at Facebook, he is dedicated to his art, family, and Starline.

Purin Phanichphant is a San Francisco, California based artist & designer whose work is shown at his studio, as well as in galleries and venues around the United States, Iceland, & Japan. Purin holds a BFA in Industrial Design and Human-Computer Interaction from Carnegie Mellon University, and an MFA in Product Design from Stanford University. Purin is a known educator and collaborator. Prior to becoming an artist, he worked as a principal product designer at IDEO San Francisco. He has taught design courses at Stanford University, General Assembly, and is currently teaching at UC Berkeley. Purin has found becoming a full-time artist to be a fulfilling and exciting new manifestation of his creative vision. His thought-provoking art pieces wonderfully combine a variety of different genres, concepts and techniques. As an artist, he uses objects to create compelling pieces that share stories and inspire action. Creating since 2010, Purin has gained an international following and today exhibits around the world.