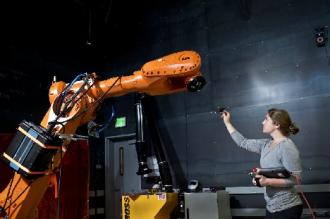 Presented by the Berkeley Center for New Media

After fifty years of promises and potential, robots are beginning to leave the lab to live in the wild with us. But how should we coexist with these intelligent, autonomous machines? In this lecture, multidisciplinary designer Madeline Gannon discusses how art and technology are merging to forge new futures for human-robot relations. She shares her work in convincing robots to do things they were never intended to do: from transforming a giant industrial robot into a living, breathing mechanical creature, to taming a horde of autonomous robots to behave more like a pack of animals. By pushing the boundaries of human-robot interaction, her work shows that robots can be not only useful, but meaningful additions to our everyday lives. BIO: Dr. Madeline Gannon is a multidisciplinary designer inventing better ways to communicate with machines. In her work, Gannon seeks to blend knowledge from design, robotics, and human-computer interaction to innovate at the intersection of art and technology. Gannon designs her research to engage with wide audiences across scientific and cultural communities: her work has been exhibited at international cultural institutions, published at ACM conferences, and covered by diverse global media outlets. Her 2016 interactive installation, Mimus, even earned her the nickname, "The Robot Whisperer." She is three-time World Economic Forum Cultural Leader, and serves as a council member on the World Economic Forum Global Council for IoT, Robotics, & Smart Cities. Gannon holds a Ph.D. in computational design from Carnegie Mellon University, a master's in architecture from Florida International University, and is a Research Fellow at the Frank-Ratchye STUDIO for Creative Inquiry at Carnegie Mellon University.

For more information, visit artsdesign.berkeley.edu. Arts + Design Mondays @ BAMPFA is organized and sponsored by UC Berkeleys Arts + Design Initiative. In-kind support is provided by BAMPFA. The series is co-curated by the UC Berkeley Department of Art Practice; American Indian Graduate Program; Art, Technology, and Culture Colloquium; Berkeley Center for New Media; and Graduate School of Journalism, and by the City of Richmond.