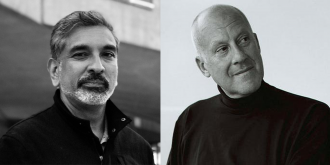 In Conversation with Norman Foster, Vishaan Chakrabarti, and John King

For this very special A+D event, the audience will enjoy an intimate interview with world-renowned architect Lord Norman Foster, founder of Foster + Partners and the Norman Foster Foundation, and Dean Vishaan Chakrabarti of the College of Environmental Design that has been pre-recorded and edited for this audience with illustrations and animations by Jonny Cox that will bring to life Lord Norman Foster's life, legacy and work. After the 45 minute special interview, Dean Chakrabarti will be joined by John King of the San Francisco Chronicle for a live discussion about Lord Norman Foster and the future of architecture. Q+A will be available.

Lord Foster, Dean Chakrabarti and King will all explore Foster's lifetime trajectory, particularly in relation to the arts, culminating in his work with his own Foundation, which promotes interdisciplinary thinking and research to help new generations of architects, designers and urbanists to anticipate the future.

Norman Foster is the founder and executive chairman of Foster + Partners, a global studio for architecture, urbanism and design, rooted in sustainability. He also chairs the practice’s Design Board which provides strategic design direction to all projects. He was born in Manchester, and after graduating in Architecture and City Planning from Manchester University in 1961, he won a Henry Fellowship to Yale University, where he was a fellow of Jonathan Edwards College and gained a Master’s Degree in Architecture.

Vishaan Chakrabarti is the William W. Wurster Dean of the College of Environmental Design at the University of California, Berkeley. Simultaneously he serves as the Founder and Creative Director of Practice for Architecture and Urbanism (PAU). His highly acclaimed book, A Country of Cities: A Manifesto for an Urban America (Metropolis Books, 2013), argues that a more urban United States would result in a more prosperous, sustainable, joyous, and socially mobile nation. Vishaan’s professional portfolio spans major new academic and institutional commissions; a mixed use village in Ulaanbaatar, Mongolia; a 100% social housing neighborhood in East New York including supportive housing for the formerly homeless; a master plan for the area surrounding Michigan Central Station in Detroit; attainable housing in Newark; the master plan and first buildings at both the Domino Sugar and Essex Crossing sites in New York; and a range of celebrated public spaces and waterfronts. In addition to their commissioned work, PAU takes on numerous pro-bono social advocacy projects; more about the firm’s work can be found on their website, here.

John King is the Urban Design Critic at the San Francisco Chronicle – a post that ranges from the architecture that defines the built terrain to landscape architecture and the public realm of cities in all its forms. The author of two books on the buildings of San Francisco, he is an honorary member of the American Society of Landscape Architects and in 2018 was a Mellon Fellow in Urban Landscape Studies at Dumbarton Oaks in Washington, D.C. His work has been honored by such groups as the California Preservation Foundation and the Urban Communication Foundation, and he is a two-time finalist for the Pulitzer Prize in Criticism. He also co-curated the “Unbuilt San Francisco” exhibition that was on display at the College of Environmental Design in 2013.